HELPS TO SAVE WILD TIGERS 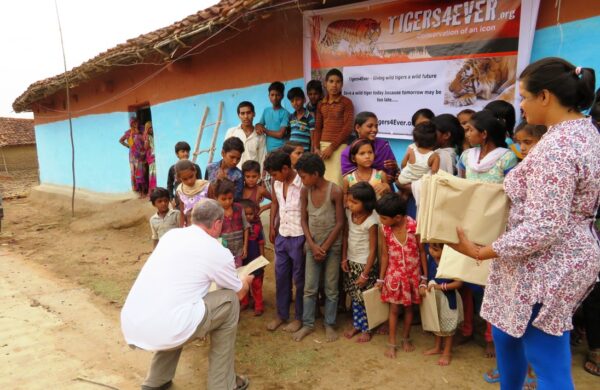 Education is key to ensuring wild tigers have wild futures. Since 2010 we’ve provided 2765 education packs for children in more than 27 villages around Bandhavgarh to enable them to go to school. Rural poverty together with the cost of basic writing material can prevent many children from attending school. Without education their future prospects are bleak. Young people with limited employment options leads to increased dependency upon the land and further pressure on shrinking tiger habitat. We want to help as many children to grow up as tiger protectors as we can each year.

The burgeoning human population has decimated India’s wild tiger habitat, increasing incidents of human-animal conflict due to lack of food for prey & predators. Bandhavgarh has over 70 villages with 44% of families having 4+ children. With the average weekly income around Rs.550 (6/$8), educational prospects for many rural children are limited by the poverty of their parents. As a result future employment prospects are limited for these children thus adding to the immense pressure on tiger habitat.

Every education pack will give a child a chance to improve critical literacy skills; future employment prospects and reduce their dependency on the land. We work in villages and with a local NGO to deliver pop-up nature schools to the poorest children. Literate adults can get jobs protecting wildlife and its habitat, rather than destroying it for agriculture. Thus reducing the impact on wildlife and reducing incidents of human-animal conflict, whilst discouraging tiger poaching as an alternative income source.

Our project will provide as many educational packs as possible each year, for the children in Bandhavgarh most affected by human-animal conflict. It helps to improve their literacy and enhance the prospect of future wild tiger survival. Educated families have fewer children: if they’re educated the potential for future population stabilisation is enhanced; which will also reduce the dependency on scarce forest resources. Our education packs are sourced from local suppliers to build their inter-dependencies on wild tiger survival.